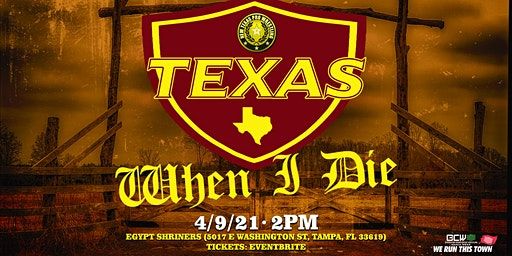 This was a fun show that took place during 'Mania weekend but didn't air on IWTV until afterwards so it felt like more of a treat for those in attendance live.   This was also the follow up event to Astroworld, so I was ready for it because since that event I am now a fan of New Texas and just in general I feel like I've been watching so much more wrestling from Texas and I love it.  I'm so glad to see so much wrestling coming out of Texas and when Wrestlemania comes to Dallas in 2022, I'm really hoping that a lot of Texas wrestlers get that shine.

In the opening contest Bryan Keith not only took on AJ Gray, he defeated AJ Gray.  For those curious, since Astroworld (and including that show), Bryan Keith has been in the ring with Lee Moriarty (Astroworld), ACH (HMW Mall Madness), Alex Kane (Family Reunion), Darius Lockhart (For The Culture) and now AJ Gray.   If you haven't heard of Bryan Keith by now it is time to start because all of these opponents are amazing so there is no excuse for you to not have seen at least one of these matches.

The second match was a Six Shooter Battle Royal and whenever someone was eliminated someone else would enter.  This felt like it had an infinite number of people in it and I probably recognize some of them from other shows, such as the winner T-Ray, but my stand out here was Moonshine Mantell who I've seen over on SWE Fury, which is Texas wrestling run by Teddy Long / Rodney Mack / Jazz and can be viewed for free on their YouTube channel.

Though the Women's Champion Raychell Rose defeated Jordynne Grace it was by count out so I'm calling for a rematch.  This was my second 'Mania week match with Jordynne Grace in it and she lost the other one as well (to Allysin Kay)   In a four way match, Fuego Del Sol defeated Izzy James, Max Heights and Myron Reed.  To show that cross promotion love, you can see Myron Reed regularly in MLW (also free on YouTube).   I remember the name Max Heights because it sounds like a warning, like "Don't go higher than this" or a motivational thing where you get taken to your full potential.  I don't know.  Inter Species Wrestling ruined me on people named "Izzy" because seeing the name Izzy James just makes me think "Well, is he James or isn't he James?"

In what was being touted as a big title defense outside of the company, Deonna Purrazzo defended and retained the Impact Knockouts Championship over Rok-C.  I said this in one of my other reviews (maybe it was For The Culture) but I love how much Impact representation we got during 'Mania weekend even without Impact having their own show.  Rich Swann, Tasha Steelz, Kiera Hogan and now Deonna Purrazzo, all champions.  Ace Austin was also on NPU MurderMania and that might have been where I made the comment, but he's also the X Division Champion.  Crazy how all these champions are represented.  I have to start watching Impact.

The main event of this show saw New Texas Pro Champion Mysterious Q defeat Gino Medina.  Gino Medina is all around Texas and in MLW, while Mysterious Q has been having a week, appearing at Family Reunion, For The Culture and in the Faye Jackson Grey Sweatpants Battle Royal where she made him unmask.  This was the first of these shows Quentin had watched with me, but he was excited to hear the name Mysterious Q and in between his art projects he did look up and watch this match.  Overall this was just such a great chapter in New Texas and everything in Texas wrestling right now just seems so hot.

Posted by Joshua Macala at 8:05 AM