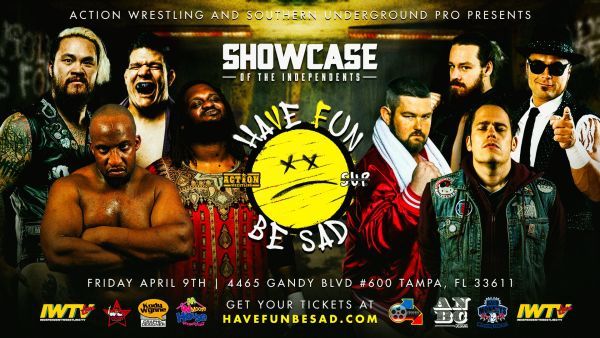 For quite some time I've been a fan of SUP and they come together with ACTION Wrestling who I more recently started watching with their event "Eyes On The Throne", which featured Kevin Ku vs. Fred Yehi (why I tuned in) and Arik Royal winning the ACTION Title from AC Mack.   There have been a few ACTION Wrestling events since that though, so I need to catch up with them on IWTV as well.

This show started with the SUP Bonestorm Champion AJ Gray defending the title against JD Drake which might have been match of the weekend.   These are two hard hitting dudes and I remember back to when I first started watching SUP, AJ Gray was the Bonestorm Champion and he cut this promo in the ring after his match and it made me an instant fan of both his and the promotion.  JD Drake is someone who is making the rounds during this weekend and he seems to be on the losing end, though everyone also seems surprised he hasn't signed with AEW or WWE by now.  (I personally would just love to see him continue to elevate the indies)

In what was a wild tag team match The Good Hand defeated the team of Brett Ison and Cabana Man Dan.   Cabana Man Dan is a wild man and he's one of those talents who I think people slept on for too long.  After this weekend, people are going to talk more and more about Cabana Man Dan.  I remember first seeing him at a show which was actually called "The Hardest Part of the Ring" and he was this fresh babyface who might hit you with a flip flop.  Now, he's somewhere between Jimmy Snuka and that character Erine Reyes Jr. played in "The Rundown".  I also know Kevin Ryan simply because his entrance music is "Daisy" by Ashnikko.

Independent wrestling loves the scramble match and in this one I only really knew Graham Bell (who had his hand in costing AC Mack his championship), Jaden Newman and Rob Killjoy.  I knew Liam Gray in name only though as well.  This was a fun scramble if only because Graham Bell has a bazooka and I swear if I can one day find an appropriately sized bazooka I will make a custom action figure of Graham Bell.  I kind of want to tackle the way the lucha masks hang from the back of his entrance coat- that looks fun to make to me, from a toy perspective.

Speaking of AC Mack, he had a match of his own next against Myron Reed, who has just been tearing it up in MLW.  I remember when AC Mack first appeared in Beyond Wrestling- that was my first time seeing him- and since then I've always felt like he was just a ready-made star.  I know that AJ Gray was in a three way match with AC Mack and Manders but I wouldn't mind seeing AJ Gray vs. AC Mack one on one.   That match would just pretty much print money.   Everything feels so intertwined in this wrestling scene too because next up there was a match that had Manders in it!

While I want to say that it seems like Manders wasn't in a lot of matches during this long weekend, I feel like he was just on the FITE TV shows which I didn't watch as much as IWTV shows.  So in this four way match, Alex Kane (who is that next level star) defeated Manders, Logan Creed (also tearing it up in MLW) and Derek Neal.   Derek Neal is someone we'll be talking about a lot over the next year, I believe, and he currently holds that giant New South Championship.   People like to say that independent wrestling is full of small wrestlers who do flips, but this match (and really most of this show) just makes me feel like that isn't true.  There are some true hosses on this show and this four way was a shining example of that.

When you see Arik Royal vs. Daniel Makabe as a match you think about how nearly every match on this card could be a main event at some other time in some other promotion.   I love Daniel Makabe and Arik Royal is slowly growing on me, though I know he won that title unfairly.  Adam Priest has been on the rise lately- as has Matt Makowski, so it was nice to see these two face off and Adam Priest getting that win was a little bit of a surprise but if you haven't heard of Adam Priest yet I think he's on his way up as well.  Wow did this card just remind me how alive independent wrestling is.

Current ROH star O'Shay Edwards took the fight to Jon Davis in a match I didn't think was possible but here we are.   I love how the wrestling style for the majority of this show can just be described as "hard hitting".  Who doesn't want to see people just beating the tar out of each other?  In the semi-main event, Nolan Edward defeated Angelus Layne in an unsanctioned match and seeing Angelus Layne literally dragged across thumbtacks is a sight I don't think I will ever forget.

The main event proved that the forbidden door was open as NJPW stars and current Impact Wrestling Tag Team Champions FinJuice defeated Violence Is Forever.  I'm going to go out on a limb here and say that seeing all the Impact Wrestling talent we did this weekend, I think next year it would be nice to see Impact Wrestling run a 'Mania weekend show.   We've seen so many of their roster members in some form, it would only make sense.   I also wonder after seeing this match if this was the only Violence Is Forever match during this whole weekend because I know Dominic Garrini and Kevin Ku had many singles matches.

From top to bottom, this card was just full of the type of wrestlers you would want to see fight simply because they really take it to each other.  Both ACTION and SUP have a unique style and they sometimes share roster members so this joint show was a good idea.  I think if you're looking for something different, if you haven't watched either of these promotions before, you should check them out as this card was one of the most solid for the entire weekend.   I had fun, but I was not sad.

Posted by Joshua Macala at 6:46 AM