Glowing hue tones come into this scene with the sound of birds chirping or some sort of similar nature vibe and then there are these deeply distorted vocals behind it all.  It has this uplifting quality to it, almost angelic within the music itself, but then the voice itself speaks like a demon.   There is also this singing though and that makes me feel like this is somehow spiritual.   A guitar comes screeching through now and it just has this overall chill flow to it.

While at times it can feel like the words are being spoken backwards or in tongues, it still maintains enough of this higher quality that makes you just get lost in the trance and enjoy what is going on around you with ease.    This takes us into the next song which has an upbeat indie rock feel to it, somewhere between Spoon and Cream, which, yes, there is probably some kind of joke in there with my placement of those two band names together.

These almost trippy tones come through in trill and this is the type of song I love because it takes you through the three steps of discovering a great song: First, you think "This sounds like someone I know, but who?"  Second, you realize "No, I've never heard anything like this exactly before" and then third, of course, you think "There should have been songs like this before now!"

With this rambling guitar feel, we go into a song which feels a little bit country (but not really) and also a little bit dreamy.   It makes me think of a band I once heard on the radio, but since I can't quite place what band that would be maybe I'm just making it up.   There is also that shine about this song you might find from Flaming Lips.    This goes into a song which is almost completely dreamy garage rock, which is a lot of fun.

Beats and spoken words like audio clips take us into a chill song that could be fueled to drive your around your local neighborhood looking for the perfect empty pool to skate.    This is fitting as a way for the first side to end as it doesn't really finish the cassette but is more of an interlude between the two sides.

There is this nice post rock kind of sound on the song which opens up the flip side and with the singing it just feels powerful, like a dreamy rock song from the early '00's on the radio and yet into a sound all its own.    It's weird because it's just so mellow I almost want to put it into some category with "easy listening", but I'm not quite sure it's with all of those type of artists such search results would bring up.

The next song has higher pitched vocals and definitely more of a psych sound to it with these little clicks in the background.   There are still melodies to be found within here though.    This leads into an all out flurry of jungle percussion.    Vocals are spoken through here and it reminds me a little bit of The Doors but not in a traditional sense.    As the intensity increases the singing becomes familiar and this song seems ready to fall apart at the seams.

A magical key sound comes in a swirl with vocals behind it being somewhat distorted but not quite as much as the first track.    This is as much trippy as it is chill and there is this hint of magic throughout it all as well.    If you are able to take this journey, I would recommend it because it's a blast from start to finish and unlike anything you have ever heard before (this coming from someone who listens to a lot of music) 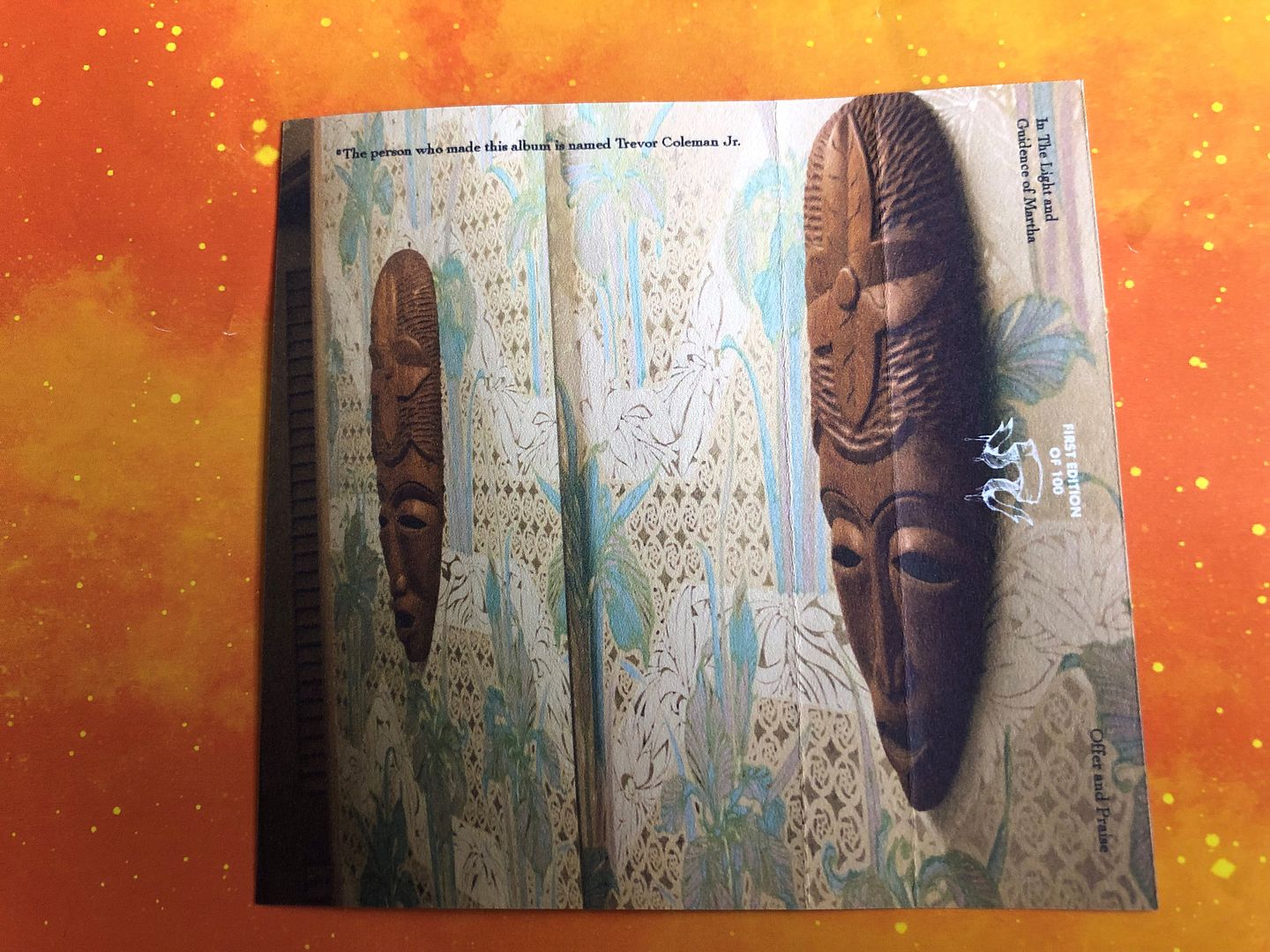 Posted by Joshua Macala at 1:36 PM