£6 //
Edition of 20 //
https://aphelioneditions.bandcamp.com/album/blackberries //
The guitar comes screeching through and then drones in static.   Sharpness comes through in small bits and it feels more like moving now.   When the drone first started it could have been heard as standing still, but now it does feel more like we're a train going down the track.   It's screeching now, as if trying to stop by slamming on the brakes.    Eventually, we just drop off and crash into the abyss, which also brings the end of the song like a hollow explosion.
Distorted guitar riffs come in once again now and these feel heavy, like a bomb.   There is a bit of that Hendrix feel within here though it is slower paced but not quite drone.   Notes now join in behind the initial distortion and it feels like the guitar is singing.   This has truly become a harmony of guitars.   There is a sliding, almost scraping sound, through this guitar work and it just adds to the song when other aspects of it might just feel like a slow rock jam this enhances that level of soundscape in a visual way.
Slowly now, the guitar notes  build back up a little bit at a time as this new song emerges.   As hues slice through I'm picturing this sound as being underwater, as we are some sort of deep sea diver combing the bottom of the ocean for buried treasure.   There is a mechanical way about this and in that sense it does feel like we're watching a video where some sort of machine is searching the bottom of the ocean- a giant claw type of machine which is able to sift through the sand.    The guitar notes come back, blistering through.
On the flip side the distortion hits like a wave.    You can really hear the notes come through now, more distinctly than at any point on the first side of the cassette, and it just has the sound of a guitar-based song which can tend to wander.  I'm thinking about taking a walk in the woods as I hear it.    There is also a certain way which notes can strike down like thunder during all of this.   It can feel like a guitar storm, which is pretty neat.  Sometimes I feel like there's this distorted loop rotating while notes scramble to pierce on through.
We're grinding and driving through all of this and it just feels like we're stuck in a hole but digging ourselves out from it.   In some ways it can also just feel as if we are crawling.   Each note is telling its own story as it cuts through the distortion, sometimes is distorted and just falls in line in what can sometimes feel like an intentional pattern while at other times it can feel more like a freestyle.   The way it just unfolds into destruction is also something worth noting, as it could seem as if everything was held together before this eventual falling apart.    It takes its time unraveling though, and you can begin to hear vocals come through in the background, as if to signify that this is indeed the end.
The final song on here might sound familiar because it is a Microdeform remix of the song which closed out the first side.   There are lasers bursting through here and the guitar work is being taken to the next level of space.   The way this brings the cassette to an end is interesting because without this final song you just feel like the world has ended, everything is gone and blank.   Adding this remix though leaves me with some sense of hope, like a flower growing out of the concrete. 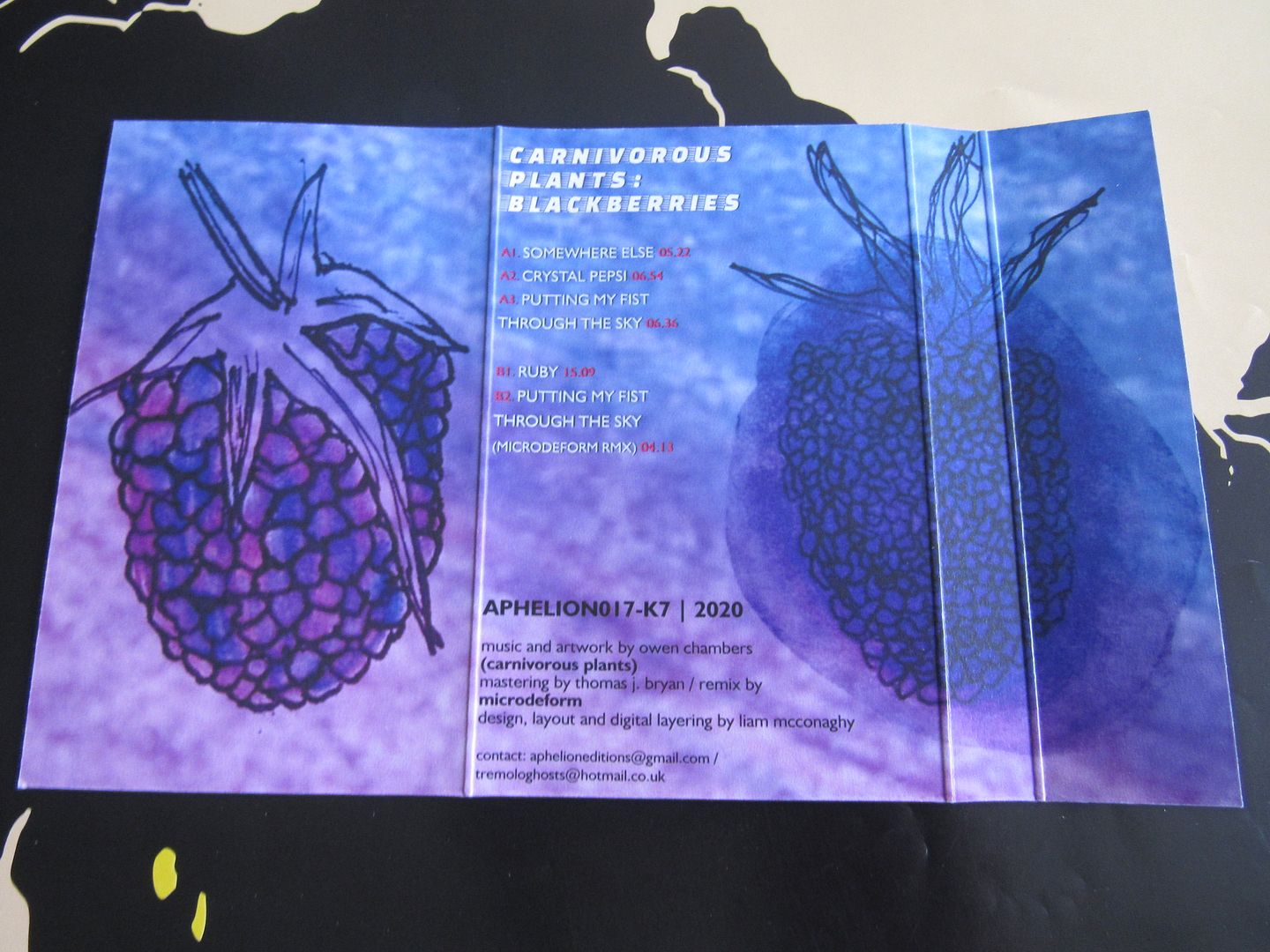 Posted by Joshua Macala at 7:13 AM