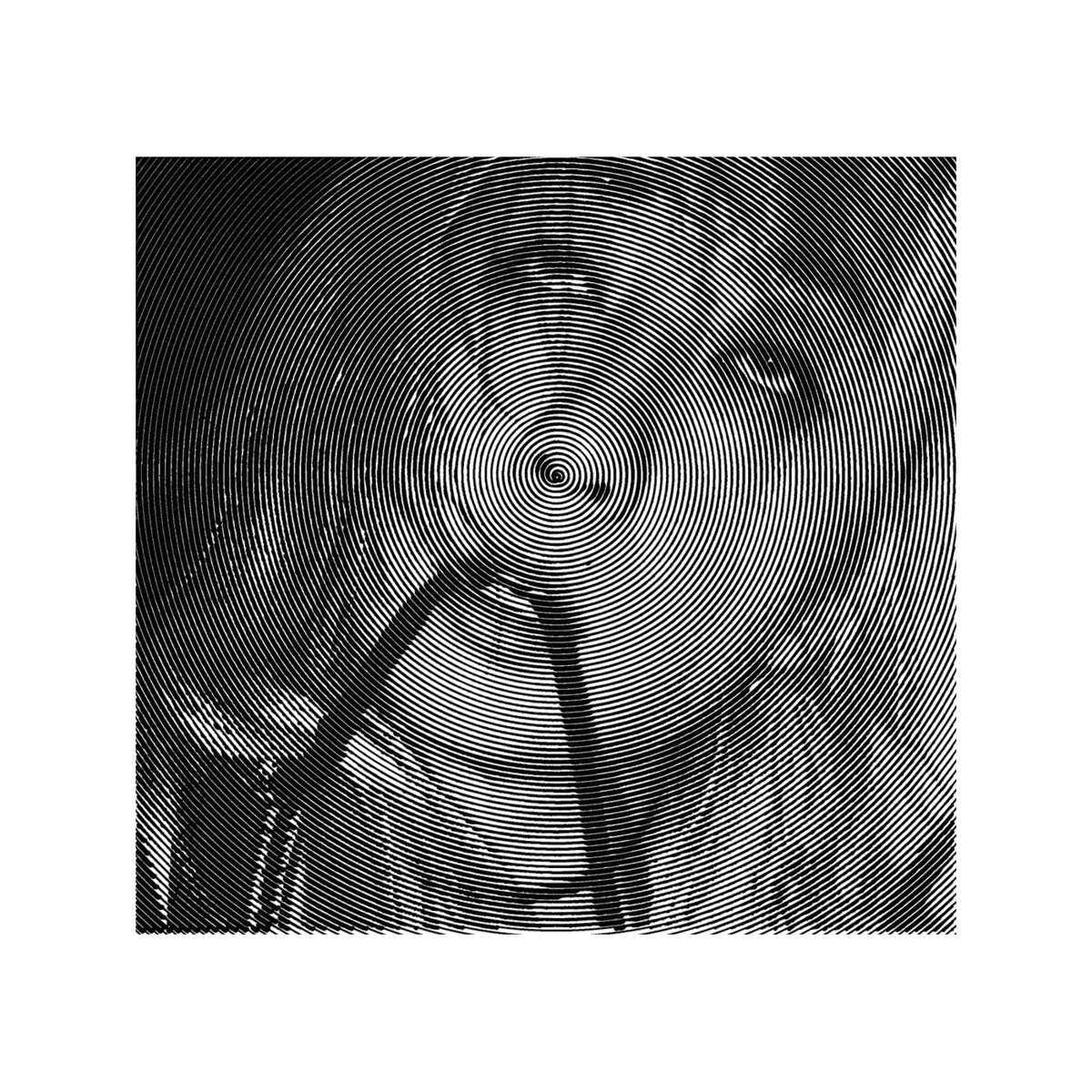 In a dark place, a static is born.  It comes through cut up into pieces.   There is a computer glitch way about these sounds, but it has more of a song feel to it than when I've heard sounds such as this before and they appear as fragments.   Through beeps as you might hear in space, this has a definite minimal sound to it while at the same time bringing about enough distorted static to make it feel complex.   How does something- let alone sound- feel so complex and minimal at the same time, I am not sure.    We ring like sonar now, through both speakers.  It is important to listen to this one both through speakers and then again through headphones for optimal experience.   You need to listen to this one closely.

As the first song bleeds into the second, for the first time I'm thinking this has an industrial sound.   It's just dropped off now into loud crashes, bangs and clanks.   That ultrasonic laser just blasting right through as we then dive deeper into bass synth which makes it feel like we're going for a drive in "Pole Position".    This grows to where it feels like if you're listening to it at night, in the dark, it might become scary for you, as it has shifted to that of a horror movie score now.  Laser blasts are fired and I'm wondering what it would be like if your typical horror movie villain (a Freddy, Jason or Mike Myers) was somehow on a spaceship killing the crew.  Why have they never sent Leatherface into space? (Though "Alien" and "The Thing" are both great)

The distortion comes through now in an alarming way and it feels like we have gone out one of those doors which says it is an emergency exit only.    The sound floats and hums.    As urgent as this sounds, if I go back to my earlier idea of putting a horror villain into space this would be the part of the film where the entire crew of the ship is being torn to pieces and it's not pretty for them (it's fun for me though- I feel a lot of people only watch horror movies to see the creative ways in which people get hurt)

"Classical Mechanics" begins with this drone that's ringing and in the background of it you can hear this motion like "JAWS" coming through the water.   It then fades down into a minimal drone and it just sets the tone for a bit of suspense.   This is one of those songs where if I'm listening to it and someone taps me on the shoulder or if I'm driving and a rock hits my car I freak out and think it's all over for me.

As we get into the "Funhouse Mirror Stage" there are some lighter sides, which make me  feel like we're on a surface somewhere, and then they switch up to where it feels like we're being pulled underground.   Whirrs come in and swirl us all around.   Through this cloud of distortion tiny pings come through which sound like they're singing "ow" over and over again.   This one just grows bigger and bigger to where it feels like it's going to boil over.   Quiet now, but for a little rattling.  A few large steps and that sound like dragging chains to end out the song.

"Bolete" is a song with some high octane synth coming through on different frequencies.   Back and forth, up and down, this one just whirrs all over the place but seems to keep steady like a march.   It feels as if we're just floating into space, but in that way like we would be lost at sea, so I suppose lost in space but that makes me think of the show.   You know how whenever you see people in movies go outside of the spaceship they always tie themselves to the ship somehow?  I imagine someone being tied to the ship, then breaking away from it and just floating away forever like a balloon into nothingness.

An electronic rattle has us boiling over as we get into some heavily distorted glitch on "Lissajous".   Little tings and electronic insects come through in blips and then waves.  It begins to sound like an alarm again and there is also this feeling of a modem trying to connect.    As we become an electronic symphony, I try and imagine what kind of rock music this might sound like with guitars and drums in places of distortion and screeches.   It's already somewhat on the cusp of industrial, but at times it can be as slow and brooding as it is violent and in your face at others.   The sound drops down to almost nothing once again, as those little computer tones bounce across the screen.

This builds into a barrage and it feels like a hail storm.    Quieter now, the synths slice through and rip apart distortion.   This track ends the way one would imagine a most violent game of ping pong ending in a virtual space.    "Fever Pitch" is the final song and it begins with a slow enging start and then shoots off into outerspace.    This blasts through space and there are some electronics in here to make the sound of the engine feel a little less lonely.   It twists through, squeaking and turning, the laser behind always there, ready to take out anyone who might get in its way.

Quietly, the engine drives; steady.   Sharper, the frequencies change and come through a bit quicker.   Distorted synth comes through louder than it all now, a feeling of some old video game being manipulated and slowed down.   Something feels as if it is certainly being fried.   We fall off into louder, more abrasive synths now, which pave the way for more sounds to come in even sharper.  This is the contrast between dark and light, loud and quiet, though always maintaining some sense of sound it also always maintains some aspect of light.