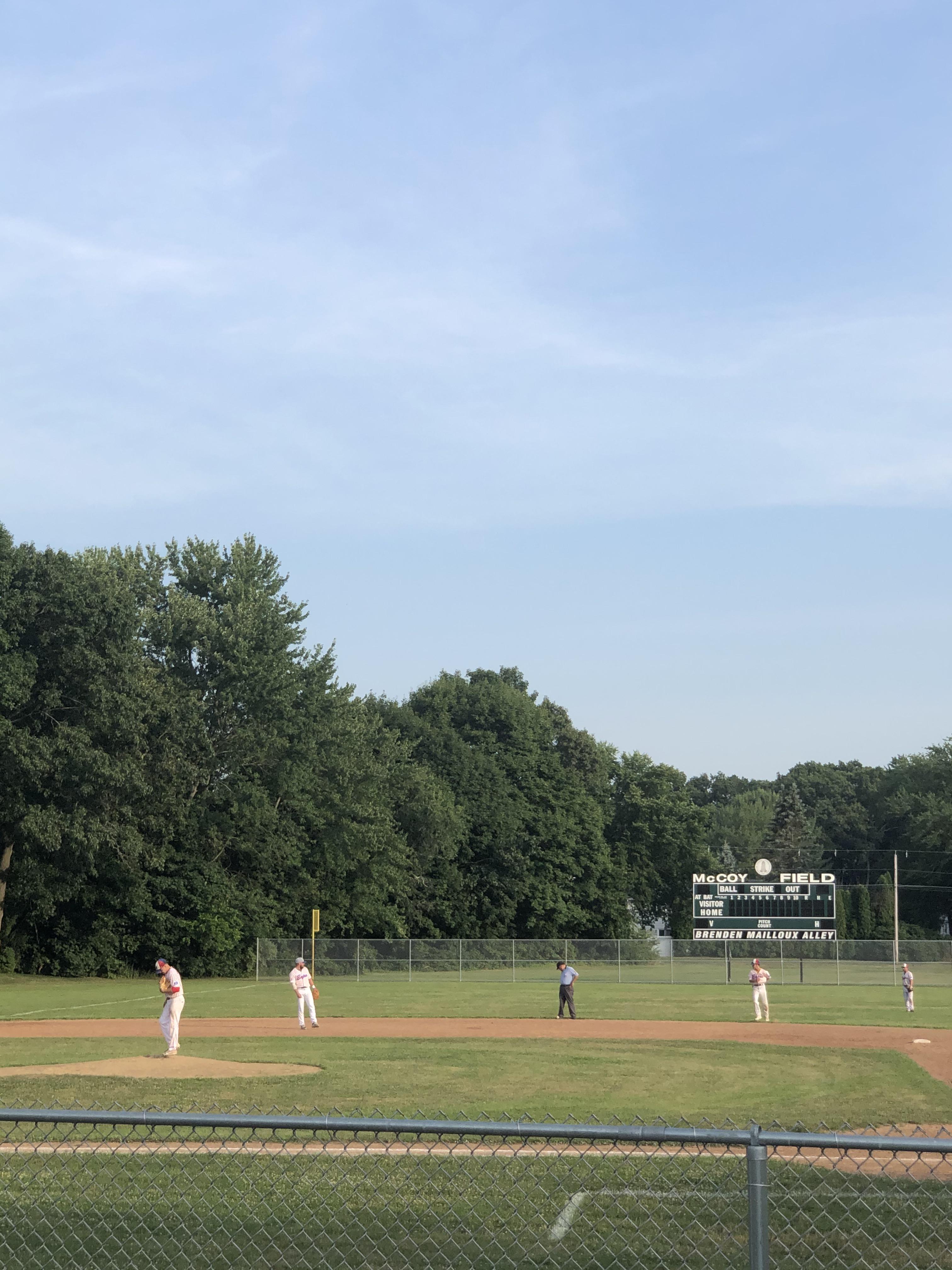 
This was my third baseball game on this humid Sunday in July and some people might think I'm crazy but it's better to be outside in some ways than it is to be inside.  After we followed the Expos to Wethersfield High School, I was bracing myself for the worst here but also thinking in the back of my head that no matter how bad this field is it can't be worse than Wethersfield High School.   To my slight surprise this was actually a really great place to watch baseball.  There was a fence around the field near the bleachers on the first base side, but we moved up to the top so we could see over it and we felt cool the whole game because we were in the shade.  It was a much better decision to be outside at this time than staying indoors.  Plus we saw a heck of a game.

The first thing I need to address in this game, to get it out of the way, is the HBP situation.   Is there a limit of how many times a pitcher can hit players on the opposing team before that pitcher is ejected?  Because maybe there should be.   The Orioles pitchers tonight combined for five HBP and their starting pitcher- Matt Purnell- had as many strikeouts as he did HBP.   Does that seem right to you?  At one point in the game, the Expos were up 4-0 and the Orioles had 5 HBP, which I thought was funny because if the Orioles had as many runs as they did HBP they would have been winning.

Look, at the very least, Sebby Grigano got hit twice.   The second time, he should have been able to take second base.  [Side Note: After he got hit the second time, he walked to first and said "Right in the same fucking spot"]   I'm not saying that the HBP by the Orioles felt intentional but they were an unnecessary part of the game and whether it's because your pitcher doesn't have control or whatever the reasoning-- there should only be so much of it that is allowed before there are more consequences than just taking first base.

With A.J. Hendrickson pitching, the Orioles seemed stumped.   They got a few hits in but couldn't really put anything together to do any damage with runs.   Here's a fun example of how not to be in baseball: Sitting on the first base side meant we were near the Oriole's dugout.  I got to listen to one of the players (who will remain nameless) explain how they were losing because of the wind.   Yes, the wind.   His claim was that whenever the Orioles would hit a far shot to the outfield, the wind would push it into the glove of the Expos.   But then he said when the Expos hit the fly balls out there, the wind would push the ball to drop down so it couldn't be caught.   I've loved baseball since I was a kid- probably longer than that particular player has even be alive- and I've never heard such nonsense before.   I was going to ask him how much he thought the Expos paid the wind but I thought it better not to engage.

The story of this game was simple.   The Expos had pitching.   The Orioles did not.    After the third inning, the Expos opened up some offense.   The Orioles never did.   But come on, seriously, don't blame it on the wind.   With all of the hits, all of the walks, all of the HBP, I'm kind of surprised that this game didn't end with a higher score than it did.  And yes, I realize that the Expos won by ten runs, but if you consider how the Orioles were playing it could have been much, much worse.

With the Expos up 2-0 it looked like that might be the final score until they put up two more runs in the fifth, four in the sixth and three in the seventh just to really stick it to 'em.  What I liked about the seventh inning rally was that there were back to back doubles by Jonathan Walter and A.J. Hendrickson and then Mike Gulino hit a bomb shot as well, everyone thinking "There's another double" but he had to one up them and get the triple.

There was a funny moment when a shot down the first base side did one bounce and a fan caught it one handed because his other hand was holding a beer.   I'm told the Orioles are currently in talks to sign him up as a pitcher.   Also, if you happen to read my Banditos review from the two games I was at earlier in the day, I saw the same baffling call here tonight when A.J. Henrickson hit the ball and it bounced off his foot- foul tip- but the umpire called it fair and in play which lead to an out.  Who would have thought the first time I saw that happen was mere hours before and now I see it again in the same day.  (I don't think they were the same umpires though)

When this season started, after the first three games, the undefeated teams were the Expos, Orioles and Phillies.   The Phillies and Orioles ended up playing each other right quick, which forced it so one of them would no longer be undefeated and that was an Orioles' loss.  The Expos took a tough loss on Thursday night to People's, so while the Phillies are undefeated as of this writing, the Expos and Orioles were both at 3-1 going into this game.  I really thought the Orioles would have fought harder to not give up their second loss of the season but they played like they were on their fourth game of the day.

Somehow, the next game for both of these teams is against each other- again!- only this time the Orioles are coming to Meriden.   Riding this momentum, it's going to be interesting to see if the Expos can sweep the big shot Orioles or if the Orioles will have them figured out and present more of a challenge this Tuesday night.   Either way, it's about to be a hell of a game and this is what the summer is all about.