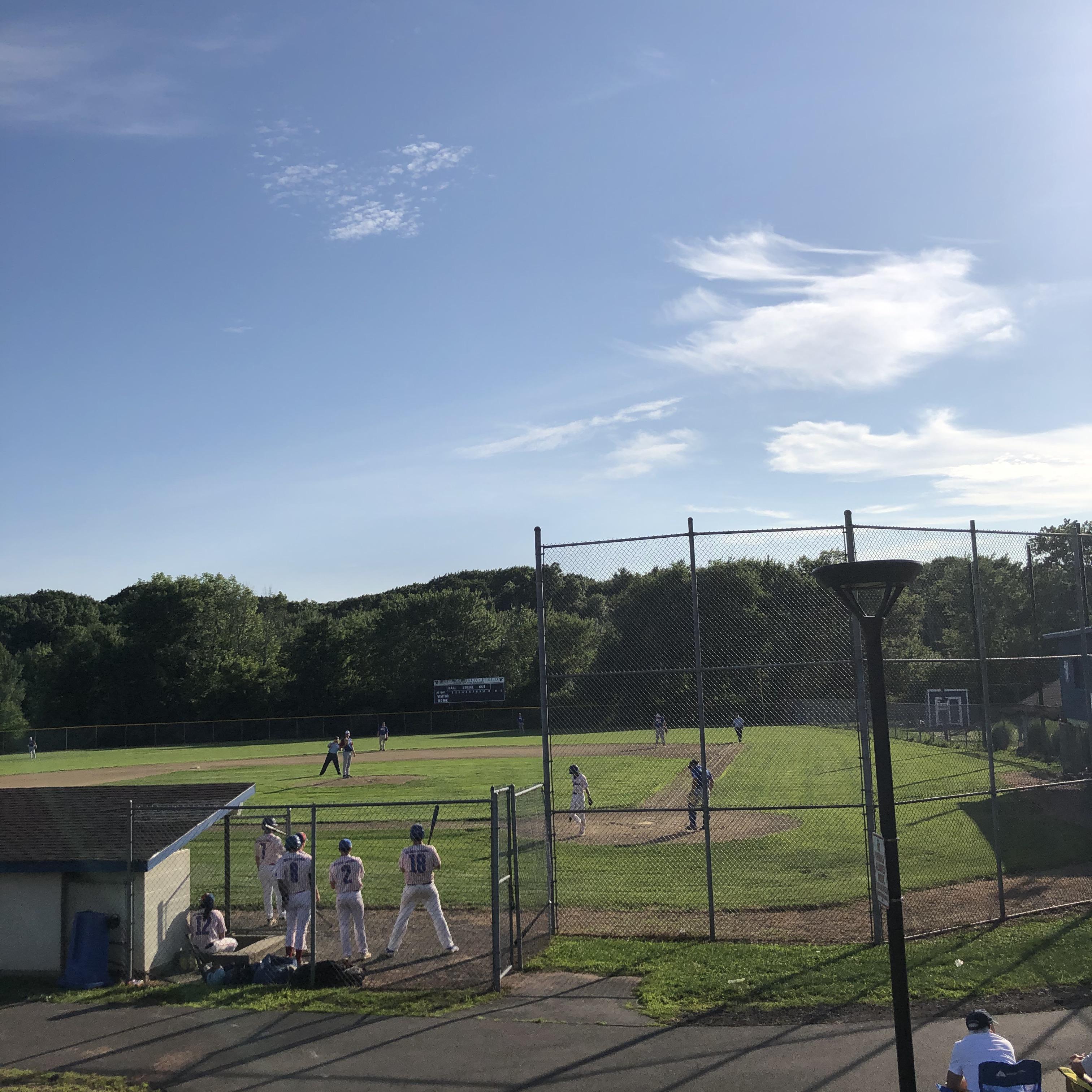 As someone who had never been to Wethersfield High School before this, I have to say that their baseball field is one of the worst places I've ever seen baseball played- and I've seen baseball played in many places.    For starters, the whole first base side is cut off by the giant, fancy dugout which the home team gets (Why make room for fans when you can have luxury) and that is also on a small hill which goes down into a football/soccer field where many foul balls were hit.  Imagine being on that field- there is no amount of heads up which could properly prepare you.   Even though we arrived somewhat close to game time (five or ten minutes before) we had our choice of seats and just felt like none of them were good.

Sitting on the third base side really restricts your view of third base.   We ended up a little bit behind homeplate, as directly behind homeplate and on the hill was obstructed by some trees.   We couldn't really see third base or left field, but we could see most everything else.  It makes me wonder what the Wethersfield baseball team is like and why they don't want people watching their games.  I said (at least once) if I was playing baseball at Wethersfield High School, I'd move.   Coming into the field we also saw the tennis courts which are at least twice as big as those at Maloney High School, and yet the Maloney High School baseball field is infinitely better.

Last season was when I first really got into the GHTBL.   Things were different then because, well, the way the world is now is different as well, but my dad was still working and now he's retired so he's more open to going places with me.  Last season I saw the Expos mostly only at home, at Ceppa Field.  This season I'm trying to see all of the Expos games that I can, whether they be at home or on the road.   Hopefully, this is the worst field we end up watching baseball at this summer.   I didn't even know if my dad would go with me- I thought it might just be Quentin and I- but not only did he go but my uncle came along as well.

It was nice out- a cool night where the breeze came when the sun went down and people put on sweaters.   There were quite a few people at this game as well.  The hill along third baseline where most people set up their own chairs was quite crowded.   It was a strong mix of fans for the Expos and fans for the home team.   And the game itself was really quite good, despite the Expos losing.    3-1 is not a terrible score because it's not a complete blowout.   The Expos had chances to come back and tie and even win the game, which made it exciting up until the last out.   People's just somehow had a better team and put together more hits, as I feel the pitching was evenly matched.

To his credit, this was my first time seeing Jason Sullivan pitching and holding People's to only three runs is quite impressive.   He had some solid strikeouts and looked like he was in regular rotation last season.   If I had never seen the Expos before, I would have just assumed he was one of their normal starting pitchers.    He pitched through the whole game and I think this experience for him, even though it was a loss, will just make him more dangerous as a pitcher going forward.  The two runs- which was the difference maker in the game- came up in the second inning.   In the third was when People's added on one more run.   That's still four scoreless innings he pitched, getting more confident as the game went on.

The Expos just couldn't seem to find the offense.   They had bases loaded with no outs and it looked like trouble, but People's got out of it.   A double by Mike Gulino in the third brought home the only Expos run.   Was it an off night?  Was it really the pitching of People's?  Was it that the home plate umpire kept calling balls as strikes?   We may never know.  My favorite part of the game, perhaps, was that a group of People's fans were seated behind homeplate, not far from us.  At one point there was this pitch which they felt was a strike and the umpire called it a ball.  One of them said "Okay, we'll give you that one for free" or something, as if the umpire hadn't called numerous shit pitches as strikes.

People's United Bank were without a win going into this game and the Record-Journal Expos were without a loss.  I've had this theory, when watching the MLB, that sometimes the hardest teams to defeat are those which are the opposite in rankings.   When the Mets had a winning record and would even be in first place in their division, they would easily beat the teams that were also on top with winning records and then lose to the teams at the bottom of the division, with the record which is not above .500.   It's such a strange theory, but it works if you've ever really thought about it and watched enough baseball I suppose.

So like last season, the Expos take their first loss to People's on the road.   This was the point when the Expos went on a twenty game winning streak last season, but we'll have to see how this week plays out for them as they're playing the Vernon Orioles twice and their records are currently the same, so those should be great games.    Let us all also take a moment to reflect on the fact that the South WIndsor Phillies are now in first place, still undefeated at 2-0, as this might be the only time we can say that this season.

Posted by Joshua Macala at 7:27 AM