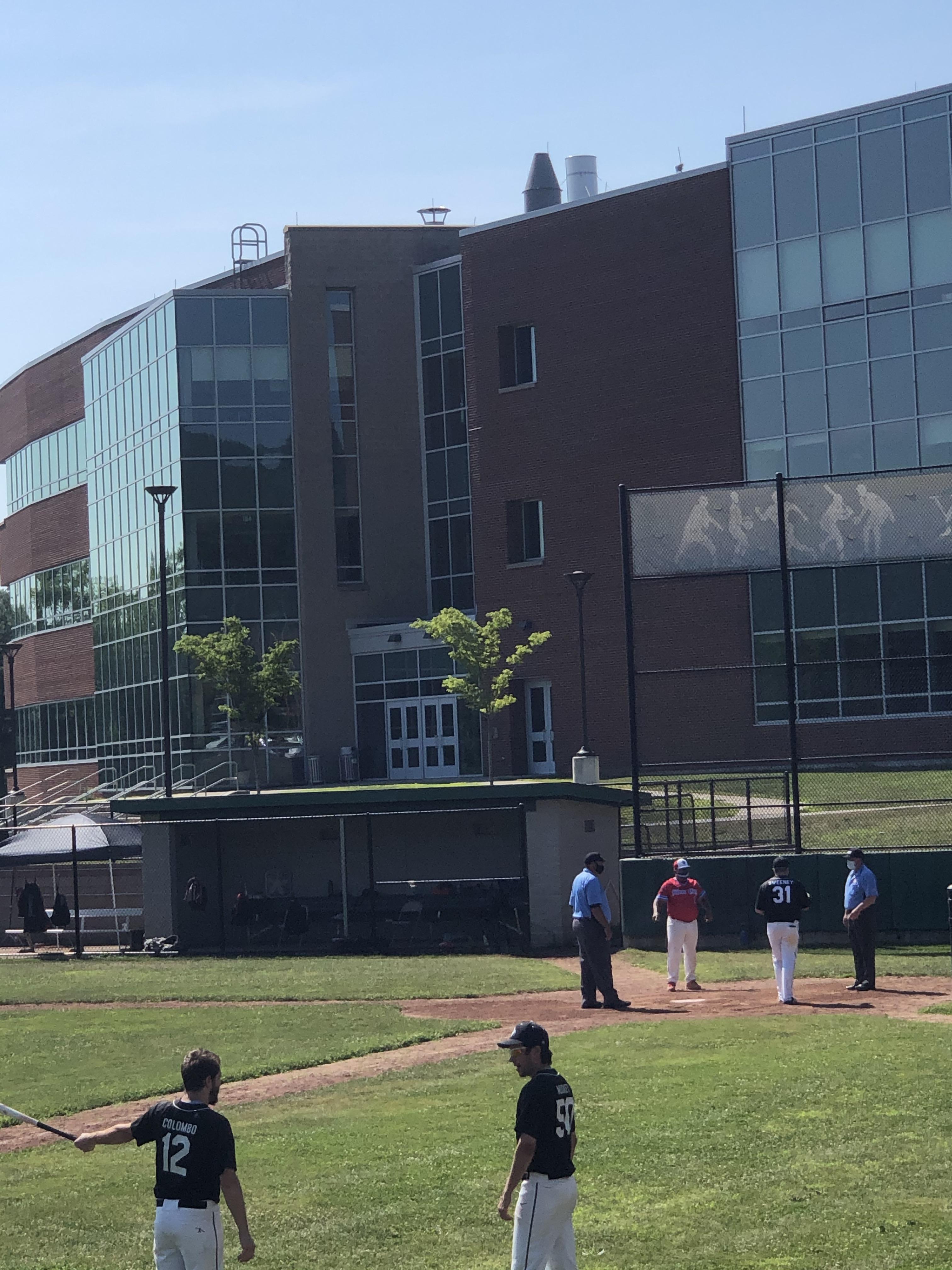 This Sunday was the second game for the Banditos, though since their games are all double headers it was technically the second set of games as they already had a 2-0 record.   Interestingly enough, the CT Black Sox were coming into this game after sweeping their Opening Day opponents as well.   That certainly made these games more interesting, as both teams seemed evenly matched at 2-0.   It was hotter out than last Sunday but there was still a breeze so along with my water, Gatorade (not an official sponsor) and sunscreen I knew the weather wasn't going to get to me.

The first game saw J.D. Tyler pitch what couldn't have been a better game defensively.   The lead off batter for the Black Sox hit a shot up the left side for a base hit to start the game but the next three batters would all be struck out.   In contrast, the first four pitches by the Black Sox starter were all balls.   In the top of the 2nd a key play was made as with two outs the Black Sox decided to send a runner from second to home.   This was an easy out for the Banditos and even with two outs already, had they kept that runner on third, perhaps he could have scored for the Black Sox.   Such a strange call.

In the bottom of the second the Banditos put up their first run.   Justin Poirer got a double when the throw to first went by the Black Sox first baseman.   Willie Rios grounded out to first, but that allowed the runner to move to third and then a hit by Drew Abrahante brought him home.   These are the types of plays I like to see in baseball, where you move the runner and without bunting.   It was one run, but if you do it enough times, you can win the game and sometimes all you need is one run to win the game.

The third inning was a big one for the Banditos as they put up six runs, going up 7-0, making it where it seemed like the Black Sox wouldn't be able to recover.   Franciso Asencio hit a big double which brought in two runs and then he was brought in by Ricky Marrero.   Franciso Asencio was having a game, hitting deep shots to left field where they couldn't be caught.   The heat and the sun also played a role in the fielding, I assume, but this game ended in some ways after the third inning.

What I liked about this game though (which I feel like we've seen before) was that the Banditos went up early, 7-0 after 3, and if the Black Sox could have gotten solid hits-- let's just say they had four more innings to put up the seven runs to tie it or even more to win it.  It's not unheard of to do.   So I don't think of it as a blowout like "This game is over" when we're in the fourth, it's more of a "You've got a comfortable lead, now don't blow it".   The Banditos did put up one more run in the bottom of the sixth, just to make the score a nice even 8.

J.D. Tyler now has fourteen scoreless innings and well over twenty strikeouts.   It seems like now we have reached a point where we aren't looking to find a team who can win the first game against the Banditos, but rather just a team who can simply score a run with J.D. Tyler pitching.

In between games, I decided to run home.   My first camera battery was dead and I drank all of my first water bottle so I figured I'd fill that bottle back up and throw it in the refrigerator and get one of my two camera batteries charging.   This would pay off well later on in the night for me.   My car said it was 103 and I don't like to think about that.  I got back to Maloney in time to see the umpires coming out of their cars so I knew the second game hadn't started yet.

The second game was a good old fashioned pitching duel with the Bnaditos scoring one run early on in the 1st, though later on one of the Black Sox would say the score was 0-0 and that confused me.   One of my personal favorite things to see in baseball- one of those little joys- is when a batter has three balls then thinks the next pitch is a ball so they throw their bat, ready to trot to first, as the umpire yells for a strike.    In this game, I saw what might have topped that little joy as the Black Sox starting pitcher got a strikeout and then tried to leave the mound before everyone informing him that was only the second out.

Justin Kolesar was the starting pitcher for the Banditos and he went all the way until the 6th without allowing a run.    At this point, the Banditos had scored one run in the fifth and two in the sixth, so it seemed like the game over at 4-0 but the Black Sox put up four runs in the bottom of the 6th, tying the game, before J.D. Tyler came in with bases loaded to close out the inning.   There was a strong chance there that we thought the Black Sox would get that go ahead run, as my dad and uncle were both here for this part of the game.

I don't usually like to call out plays (or perhaps that's all I do) but in the 3rd inning there was a ball which Franciso Asencio hit off of his foot and the umpire called it a fair ball.   I don't know how many times I've seen someone get a piece of it like that then have it go off their foot but this was the first time I've ever seen it be put into play and that was definitely odd.   But it seems like if we learned anything from last week though it's that scoring against the Banditos just makes them score more, as they put up their own four runs in the top of the 7th.   Imagine if this wasn't an away game and they could have just walked it off.   But J.D. Tyler came in to finish the seventh with two fly outs and a K to end the game 8-4.