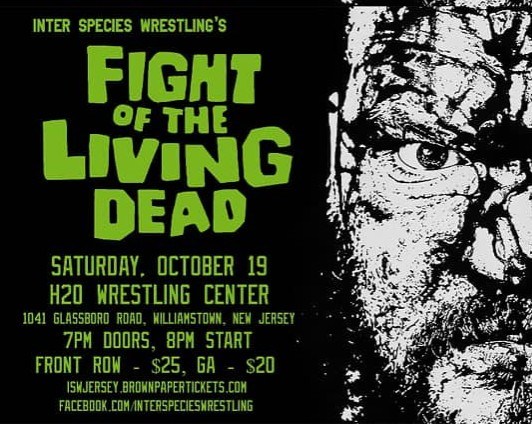 This was my first time watching Inter Species Wrestling and it definitely delivered on what was promised.    If I had to sum up ISW in as short of a sentence as possible I would basically say to think of it as being a bit like CHIKARA but not family friendly (They swear.  A LOT)  But there was also a death match of sorts on this show, so that's kind of out of the norm for CHIKARA, right?   I think this is like CHIKARA, to me, because of the characters involved in here.   It's one of those rare times in wrestling when you're able to put the idea of wrestling aside (Though it's there) and focus on the characters.

Case in point, this show opened with the Werewolf of Wallstreet taking on LSG and it was pretty much what you would expect from a guy (LSG) who is kind of like this hunter (like Kraven) and he's going after a werewolf.   There was biting, scratching and... bellyrubs.    Yes, on his way to the ring even the Werewolf of Wallstreet let a fan scratch him behind his ear.   It just puts you into that mood whether you're either in or you're out, but this is one of the aspects of professional wrestling I truly enjoy seeing.

The GLAAD Boys lost to Los Dumbfucks (There is that profanity) and if it needs explaining the GLAAD Boys are a couple who got a lot of "Gay Stuff" chants and Los Dumbfucks remind me of those crash dummies.   You know the ones.   But this was apparently their first win and it was a big one.

Tony Deppen took on "The Millenial" Chance Rizer and though I've never seen Chance Rizer before it seems like Tony Deppen is on every show I watch now (which is not a bad thing)  Chance Rizer started this show on his phone and he did some spots without looking up from it, but Tony Deppen really had his chance (no pun intended) to shine here and I wouldn't be surprised if Tony Deppen became a household name in the next few years.

In a weird mixed tag match Jeff Cannonball and Terra Calaway (who are married) took on Sexxxy Eddy and Addy Starr.  I keep seeing Sexxxy Eddy and Addy Starr everywhere too, so this was a nice pairing.   Sexxxy Eddy got into this conversation with Jeff Cannonball which upset Addy Starr and this turned into a battle of the sexes as they changed partners and then at the end of the match they had to try and make nice.   Much sexual innuendo here and at the end, it did this weird skipping thing where it showed Sexxxy Eddy leaving the ring, cut to the introduction of Pinkie Sanchez and then went back to Sexxxy Eddy.   Maybe my wi-fi is just weird.

Pinkie Sanchez introduced me to Billy Brash and Boris the Bear had an open challenge and took on Scuzzy Dead Guy who didn't look like a zombie.   I went to this wrestling show once when I was in my early teens and they had this wrestler come out fourth or fifth on the card under a mask and I swear he was the same guy from earlier in the night unmasked I just couldn't ever prove it.   I think they do that kind of thing in CHIKARA though, right?

The tag team titles were defended by the Gym Nasty Boys against Team Tremendous.  A few years ago when I tried to get back into wrestling I saw Team Tremendous a lot, but seeing them now as heels seems cooler somehow.   I'm also a fan of the Gym Nasty Boys now and anyone who hasn't seem them wrestle should go out of their way to see them wrestle.  I know this may sound simple but they hit a lot of innovative double team moves, which can't be said for a lot of tag teams, and it's aspects like that which make the difference for me and make me love tag team wrestling.

"Bulldozer" Matt Tremont (who is also everywhere, since I recently saw him take on Orange Cassidy) defended the King of Crazy Title against Sean Henderson.   There was a nice promo cut by Henderson before the match (in his bedroom?) where he talked about how he was the first student of Tremont and they had this bond but he was still coming for the title.  The thing is, I knew nothing about Sean Henderson prior to this match but that promo made me believe he could actually win it.   I want to say it's "that easy" to sell wrestling but it's really not.   ISW just makes it look that easy.

The main event had weapons including off brand Legos and it just fit that perfect bill of a little bit of everything on the card, which is how I tend to best enjoy my professional wrestling.   This is available on Blu Ray and they said during the show to buy their t-shirts but I'm not sure how to go about ordering such things (I really want a shirt) but their website does say they want to return to Connecticut in 2020 and I'm so ready for that.