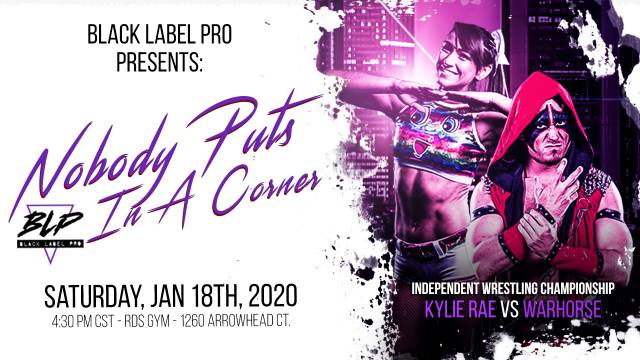 You have to imagine- and I'm sure I'm not the only one- but I went from watching Isaias Velazquez fighting Arik Cannon in Freelance to Isaias Velazquez fighting Alex Shelley (who recently appeared in NXT) in Black Label Pro.    I really feel like Black Label Pro is one of the few promotions out there creating cards where every match just feels so special- even if only because I usually know everyone on their cards.

From Alex Shelley and Isaias Velazquez this went into Violence Is Forever taking on Corn Beef, the team of Manders and Big Beef.   So, three of those IWTV Awards winners are in the ring here.   This was a great tag team hoss fight and if you somehow got Bear Country involved for the triple threat (elimination style) it would be the best possible tag team match I could think of right now.

I feel like I've only seen bits and pieces of Hammerstone in MLW (I can't remember a match I've seen where he wrestled but I'm sure I've seen it) and AJ Gray is just becoming one of the most consistent in the ring in terms of putting on great matches.   Rocky Romero is always a pleasure to watch and this match against Ophidian was no different.   I want to see Ophidian live this year.

From seeing Kylie Rae in Freelance to BLP here, it's fun to watch her challenge Warhorse for the IWTV Independent Wrestling Title.   This was one of my two picks for match of the night and one of those matches you need to go out of your way to see in January 2020 because it just felt like these two threw everything at each other.    There were times when I swore Kylie Rae was going to win and at times it even felt like the crowd was turning on Warhorse (maybe because of that missed Dirty Dancing spot)

The other contender for match of the night- which you need to go out of your way to see- is Erick Stevens defending the BLP Heavyweight Title against Tom Lawlor.   This match was insane and just two dudes beating the shit out of each other.   What more do you really want to see?   I really hope Erick Stevens sticks around past April because I feel like there is still so much he can do and so many more wrestlers he can face which he may not between now and then.

In the main event, we saw a number of familiar faces and some new ones in The Greatest BLP Rumble Match.   Kobe Durst seems to be everywhere these days and he was in this along with Gary Jay.   There are just too many people here for me to say "Yeah, I've seen Graham Bell before" and "This was my first time seeing Nolan Edwards" so I'll just say that some of the highlights in this match to me were Wheeler Yuta's lasting for so long, Danhausen eliminating himself but still smiling, Austin Manix being in this along with Project MONIX for that Manix on MONIX violence (Now I just want to see Project MONIX vs Oswald Project) and Shane Sabre coming out as Ethan Page.

There was a bazooka and a unicycle in here.    Billie Starkz, Hawlee Cromwell, Alice Crowley and Blair Onyx all stood out in this match in their own ways.   I think the one wrestler I've never really seen before but now must follow based on this match though is Joshua Bishop (Hello, fellow Joshua!)  He's just this ass-kicking dude and I want to see him fight in so many potential matchups now.

My only complaint with this match was that Gary Jay and Kobe Durst went through a door on the outside and then stayed out there for quite some time recovering.   Since they spent so much time outside the ring, I felt like they should have been eliminated because it wouldn't have been fair for them to be able to come back in after all that time and win it, but neither of them did win (Though Gary Jay came close) and now we are about to enter the era of Jake Something.

Posted by Joshua Macala at 1:54 PM