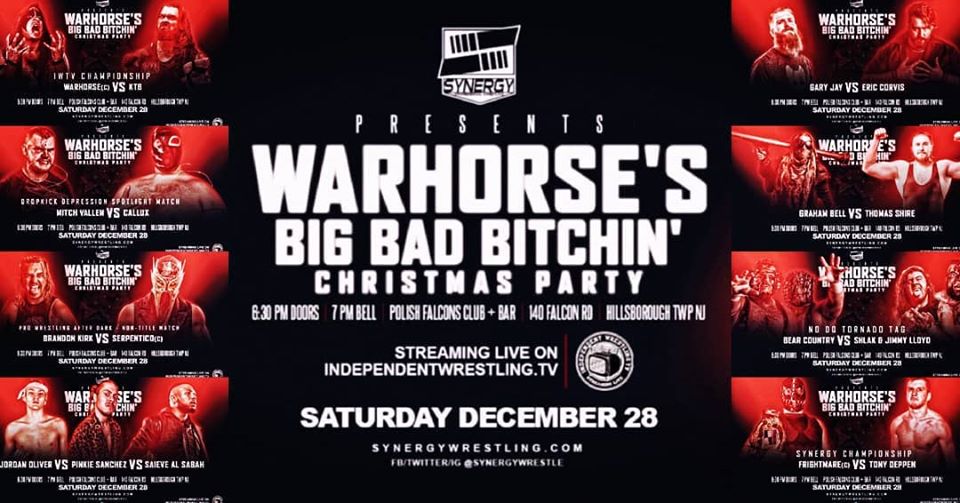 Additional Photos can be found in the Facebook album here :::

One of the things I like about living in Connecticut is that I can drive to a lot of places to do a lot of different things.   I kept reading on Twitter about WARHORSE's Big Bad Bitchin' Christmas Party because I- like everyone else should- follow WARHORSE on Twitter.   At some point in time, maybe it was because of the poster, I googled just how far it was for me to drive to this place in New Jersey.   When I saw it was about two and a half hours, I thought "Well, I drove one and a half for Chaotic, so what's an extra hour?"   Being on a Saturday helped because there was no work/school beforehand so we could leave early and take our time.

The day that I decided to buy tickets, I picked Quentin up from school and we had one of our favorite exchanges.

Me: Quentin, guess what we're doing on Saturday?
Quentin: Going to see wrestling?

See.   I didn't even ask him if he wanted to go.   He was already into it.   If I had something else planned he would have been disappointed.   He also knew about WARHORSE via seeing him on IWTV with me and I showed him the photo I took with him, the t-shirt and trading card and all from Blitzkrieg's NOTAFINGAH event, so he was excited to see WARHORSE.

I really will admit that I wanted to go to this show because it was being put on by WARHORSE but also because the entire card had at least one wrestler per match that I really wanted to see.    A lot of them I were seeing for the first time- like Bear Country (officially), Tony Deppen, Frightmare and even Pinky Sanchez.    This was just such a stacked card... it was the type of card you would drive two and a half hours to see.

When I woke up on Saturday morning, the Saturday in between Christmas and the New Year, I checked the maps and it said it was about two and a half hours to the show with tolls and two hours and forty five minutes without.   I figured what was an extra fifteen minutes without having to pay tolls, but I also knew we'd likely stop for food and such so I planned on leaving around 2:30-ish for a 6:30 doors.   I also knew in the back of my head that since this would be on IWTV it would likely start on time.

Closer to leaving time, the time expected to get there went up like crazy.  It was three and a half hours with tolls and four hours and change without.   I knew we had time so I tried to go without tolls at first.   We sat in traffic in CT for no reason for an hour.  I swear they had me at 45 miles on the highway and we went down to 41 miles to go in a half an hour.   It was such the opposite of what I wanted to do that by the time we got closer to NY the maps asked me if I wanted to save a half hour and go through the tolls so I said why not and did it.

Over the summer, the weekend of the Fourth of July to be precise, Quentin and I went to his first Mets game, so he's been to NY before but this was his first time in NJ.   I cannot even recall the last time that I was in NJ but it was definitely the early '00's, likely to see some band.   New York flew by and driving through NJ wasn't that bad either- it was just getting the hell out of CT that sucked for the drive.

We were on this sort of main road off the highway when we were almost there and we decided to stop at a Wendy's because I just had a white Monster.   Quentin wanted a kid's meal and a frosty, I figured he could eat it in the car when we got there, but we ended up taking an extra fifteen minutes driving in circles because the maps app wanted me to go to this apartment complex that was maybe 500 feet down the road from the actual place we were supposed to be.

Somehow- somehow- we still made it there a little before 6:30.   We waited outside in line for a little bit while Quentin ate his frosty.

I'm curious to go back and watch this event on IWTV now because I'm not sure how a lot of it came off on tv versus being there live.  Thomas Shire (who I really like and was really looking forward to seeing) was getting called Spider-Man by this group of fans behind us and I thought that was kind of funny but also, like, what's so bad about being Spider-Man?  It was still funny how they'd pull out references like "Look out for Harry Osbourne!"

As these things tend to go though, I felt like I was in this bubble of my own with the wrestlers and the crowd had their own ideas of who to boo and who to cheer.   I know the history of WARHORSE and Gary Jay.   I've never heard of Eric Corvis before tonight, but I've watched enough IWTV that I refuse to boo Gary Jay- especially when I'm seeing him for the first time- because that man is tough as shit.

Two of the highlights which stood out for me were during Serpentico's match, he came over and sat in a chair next to Quentin.    This was a nice touch and I feel like even though he was trying to play the heel (though his opponent called out Homicide so who knows) I think Serpentico got that idea of trying to win over the kids (and Quentin is a sucker for masked wrestlers, like me)

My other highlight was during the Tony Deppen-Frightmare match when they came flying out of the ring and everyone jumped to move except for Quentin and me.   They landed on Quentin (mostly Deppen) and everyone around us was kind of asking Quentin if he was okay.   Even after the match it felt like Frightmare was a little concerned.   But Quentin no sold it and just told me "They kind of landed on my legs, but it didn't hurt"

I'm jumping around a lot to tell this story, but that's okay.  It flows better than if I do it in an actual chronological order I think.   When the show was over and we were driving home, I asked Quentin what his favorite match was and he said it was the main event with WARHORSE.    That was actually my favorite match too (Though it's hard to pick just one) because as much as you think of WARHORSE as being this gimmick, like the Ultimate Warrior, you forget just how tough and strong he is.   He can pull out moves that it feels like he shouldn't be able to and he's just such a great all around wrestler.  (Probably why he's the IWTV Champion)

If I had to guess though, I think Quentin was also a fan of the hardcore match between Bear Country and Shlak and Jimmy Lloyd.   It was just carnage and after the match, Quentin went and grabbed some of the items used in it.   We ended up leaving with two busted ornaments (one much more destroyed than the other), a candy cane and a bunch of Legos.    They had intermission after that match so while cleaning out the ring Quentin was just picking up Legos.

During intermission, I found Bear Boulder and asked him if it would be possible for Quentin to take a photo with both members of Bear Country and he said yes.   It's funny (not haha) to me though because Bear Country is this huge, scary tag team that... Let's just put it this way: If I was in wrestling somehow, as a booker or whatever and someone said to me "Hey, pick a tag team to go up against my tag team" I would pick Bear Country every time.   And I love that they take the time to take a photo with Quentin because I feel like most kids would be afraid of them (yet my kid loves them)

Through the merch tables at intermission, we also found Tony Deppen.   People like to boo Tony Deppen because he's such a great heel but he's this combination of Bob Backlund and Daniel Bryan to me and I don't think anyone will ever realize how much of a compliment that truly is.   I talked to him about how I was supposed to see him in Blitzkrieg! and didn't, but that he's one of my favorites and we took a picture and I bought his shirt (Even though I tend to like rules)

After all was said and done, I could tell Quentin was tired and ready to sleep, but I just kept telling him "Five more minutes, five more minutes" we'd wait for WARHORSE to come out.    I want to give a special shout out to Synergy's food stand because I love that I can send Quentin over there by himself with $5 and he can come back with all of this stuff.   I'm used to going to baseball, for example, where what you want for food is five times the price of what it is on the outside.   So thank you professional wrestling for keeping my son fed on the cheap.

You can watch this show on IWTV and see the action from inside the ring.   You can see Pinkie Sanchez get robbed by Jordan Oliver.   But being there live is just something so different that I cannot stress enough how if you're in the area and can drive to a Synergy show you really must.    The wrestling- what happens inside the ring (and outside of it)- is solid and if you look at the talent on the show you would easily realize that you're in for a treat.

But this was Quentin's second wrestling show and it was a big one.   It was my fifth in a row since getting back into wrestling and I had so much fun.   I felt for so long like wrestling had become such this negative thing in my life, but now I'm realizing that there is so much positivity to it you just have to look in the right places.   Tony Deppen would have been on my list of wrestlers to see in 2020- a lot of these wrestlers would have been- had I not seen them on this night.


Soundtrack:
Smashing Pumpkins
As Cities Burn
Sorority Noise
All Get Out
Math The Band (back)

Posted by Joshua Macala at 2:51 PM