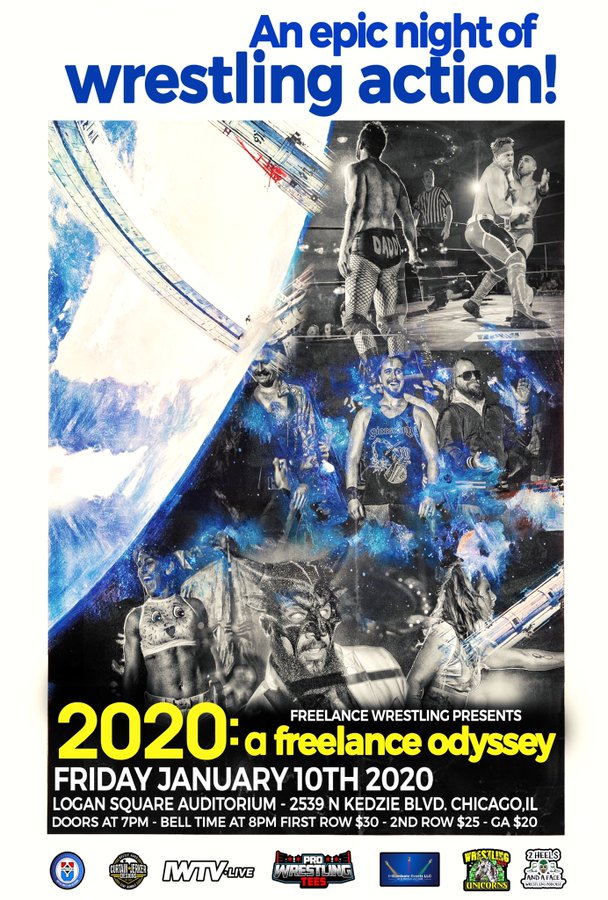 Following that amazing match between Kylie Rae and Ethan Page last year where Kylie Rae won the Freelance World Title, I instantly became a fan of Freelance Wrestling to the point that every time an event comes onto IWTV I will watch it (if I am unable to stream it live, which I'm usually too busy for live streaming these days)   This was the second show I streamed this year (after SUP Stay Cold) and it had a... dark feel to it.    I feel like I'm getting to know a lot of these wrestlers, but maybe it's just in their names.   Maybe it's because if I actually sat down and thought about what promotions I watch the most consistently Freelance would definitely be on that list (I'm just writing about them all this year)

There is a story in this show which comes full circle- from the opening contest until the end- but I'm going to talk about the other matches first because they need attention as well.   Laynie Luck is one of my favorite wrestlers right now (For reference: she usually comes out wearing a unicorn head) and seeing her versus Elayna Black just felt perfect.   Effy defended the Legacy Title against a different type of daddy in Dan The Dad, who I really enjoy as of late as well.

Seeing the Space Pirates is always a good time and then this wrestler named Isaias Velazquez defeated Arik Cannon.   I feel like I've seen Isaias Velazquez before but I can't be sure.  All I know is I had to google his entrance music and found out it was Drake.   Dammit, I wanted Jimmy to stay on Degrassi!   But this was a solid match and as you would expect, this show just had action from top to bottom that was worth going out of your way to see.  I don't like ranking promotions with numbers, so just know that Freelance Wrestling is one of those I go out of my way to watch and so should you.

Now, the real story here.   This show opened with Kobe Durst defeating a number of other competitors (including Danhausen) to earn a title shot against Kylie Rae at the end of the show.   The next match had Frank The Clown and Robert Anthony defeat The Yardy Boyz (Rickey Shane Page and Alex Ohlson) and this was an interesting match to me because Frank The Clown is such a natural heel.  Who is Frank The Clown?  He's a fan who tried to get himself over on television and if you ask the people who watch wrestling about him they'll mostly tell you that he's annoying.   He's a distraction.   He takes away from what's going on in the ring, so might as well put him in that ring.

At the end of this show, after a great match between Kylie Rae and Kobe Durst, Frank The Clown came out with Robert Anthony and cut this massive heel promo on Kylie Rae.   It was actually really effective and it makes you hate Frank The Clown, as you should, but also you kind of feel like he's got a point in what he's saying.   You wonder whether or not Kylie Rae could defeat Robert Anthony.   And Freelance just set up what could be the match of the year.   This segment to close the show just has me hooked and that much more hyped for their next show, which is something every promotion should be doing these days (and sadly they are not)

Perhaps my favorite part of all of this- and this just might be me or maybe it's what was intended all along- is how well this all played out in terms of Frank The Clown becoming this foe for Kylie Rae.   Kylie Rae is known as "Smiley Kylie".   Clowns are known for their smiling and happy demeanor as well.    I wouldn't call Kylie Rae a clown, per se, but they both bring joy wherever they go.   They are both, in theory, to be cheered and adored by children of all ages.

And yet Kylie Rae and Frank The Clown are so different.   I don't like to use cliches, but I feel it is the only way here to say that Kylie Rae and Frank The Clown are simply different sides of the same coin.    And this match is set for the next Freelance Wrestling show- Kylie Rae vs Robert "Ego" Anthony.   And I'm concerned Kylie Rae's title reign might already come to an end.   There is awesome artwork for a poster of this already (I'd buy a print signed and shipped to me) and I think this might be the year of Freelance Wrestling if things keep going this way.

Posted by Joshua Macala at 1:53 PM