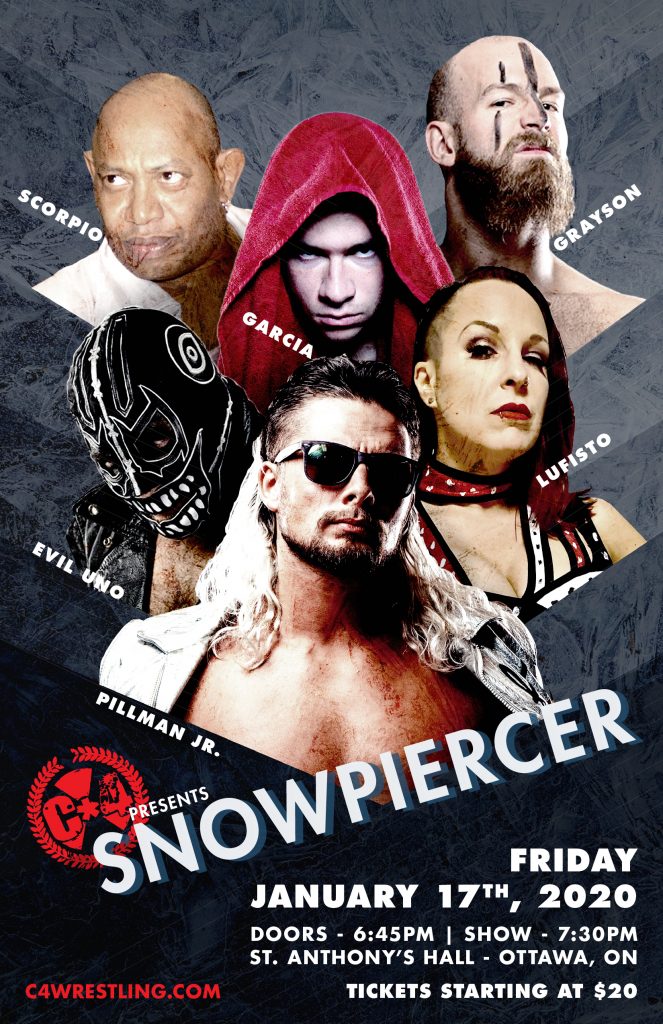 Sometimes, all it takes for me to want to watch a wrestling show is one match.    For me, for that match, it was LuFisto vs 2 Cold Scorpio.   I don't care who you are or what your thoughts are on wrestling on a whole, but LuFisto vs 2 Cold Scorpio is one of those must see matches and that's even before I watched it.   Just knowing it is out there in the universe and can be watched... I must watch it.

This show had a lot of different styles of wrestling, but it was mostly fighting.   It's weird because when I think about the wrestling promotions I watch the most, C*4 seems like it combines those wrestlers into their own with some talent I don't know (which I assume is their own)  A good example of this is eight person tag match on this show because I knew who Sexxxy Eddy, Puf and maybe Alexia Nicole were going into this, but I didn't know their partner James Stone or anyone on the opposite team (Though Pretty Ricky is like if Anthony Greene and Brian Kendrick had a baby somehow)

Perhaps a more apt example is the threeway between Kobe Durst (who I keep seeimg everywhere), Brian Pillman Jr and Stu Grayson, the last of those names being the only one I didn't really know going into it.   But I got to see Maine State Posse, which was a lot of fun, as they challenged for the tag team titles in their debut with the promotion.   I've also seen Mike Bailey here and there, not a lot, but I do really enjoy the Prince Charming gimmick of Aiden Prince.   I suspect I'll be seeing a lot more of Aiden Prince this year.

This show didn't have a bad match on it.  I was entertained from start to finish.   I always like to try and pick out that one match that is "match of the night" and you have to think back on later as possibly being "match of the year".   With "Snowpiercer", not one, not two, but THREE matches fit that title for me.

Obviously, LuFisto vs 2 Cold Scorpio delivered in ways I couldn't have possibly imagined.  It was everything you could have hoped for and more.   2 Cold Scorpio can still go so seeing him didn't feel as nostalgic as much as it did like he had never left.   And I'm not sure why LuFisto isn't someone I see more in my every day wrestling.  There are these women divisions in WWE, AEW, ROH, Impact, etc. that would all benefit from having her there but it remains a mystery to me.  Hopefully- hopefully- she'll come somewhere near me in 2020 so I can see her wrestle live this year.

Now let's talk about Space Pirates vs Bear Country.   This is everything that tag team wrestling should be.  Bear Country is a much larger tag team than Space Pirates.   Watching the match, I felt like Shane Sabre and Space Monkey combined could maybe equal the weight of Bear Boulder.   But somehow, you felt like Space Pirates had a chance to win.   It was never the squash it looks like on paper.    And because of that this was just one of those rare perfect tag team matches (with little weapon use) and of course it contains two of the best tag teams in the game right now.

To me, the term "main event" is funny because people often debate whether or not the final match is the "main event".   For me, going into this, I wanted to most see LuFisto vs 2 Cold Scorpio, which ended up third on the card.   But the final match on this show clearly was the main event as the C*4 Champion Daniel Garcia defended his title against Evil Uno.   This was a match where these two guys just threw everything they had at each other and it felt like it was never going to end because they wouldn't be able to defeat the other.

I've seen "Red Death" Daniel Garcia here and there in Beyond Wrestling and if you're like me or if you've never seen him and want to know what makes this wrestler so special, go watch this match.   Also, I feel really badly for all those chops Evil Uno missed and hit the ring posts on.   I felt that in my hands.

Overall, this show had everything you could ask for on it.   I knew maybe 75% of the wrestlers going in, but some of them I knew only a little made me more of a fan than I was before.   I made some new friends in the way of wrestlers to go out of my way to see (Hi, Alexia Nicole! Hi, Aiden Prince!) and from start to finish there was just never a dull moment on this show.   Definitely worth a watch.

Posted by Joshua Macala at 1:54 PM