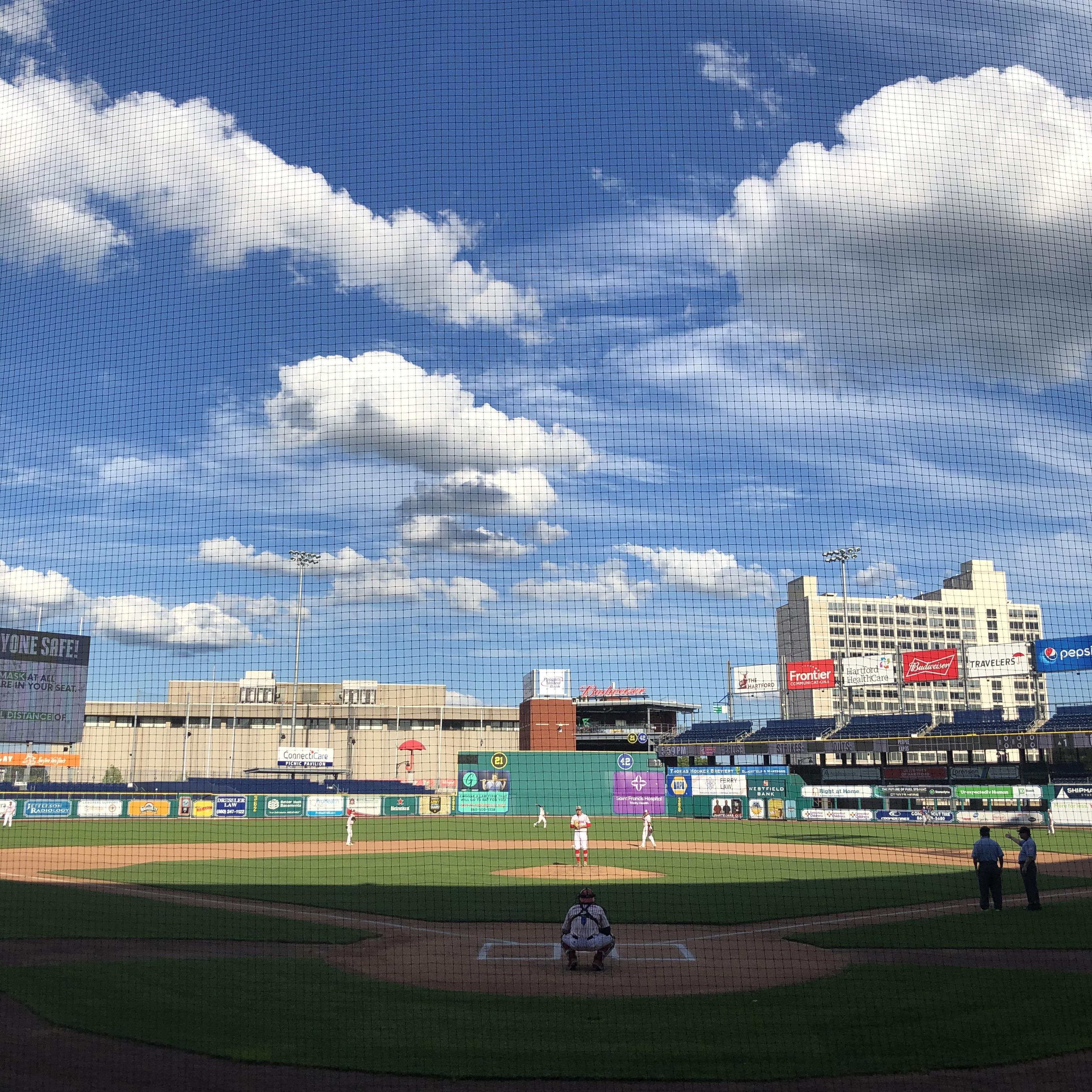 
When the idea of putting a baseball stadium in Hartford was first brought up, many people were upset that the Double A affiliate would be leaving New Britain.  What people didn't perhaps realize then was that this opportunity would create more baseball in the state of Connecticut and that's not a bad thing.   Since the creation of Dunkin Donuts Park I have somehow found myself there a decent number of times and yet I've been there more times for games which didn't involve the Yard Goats than for games that did.

Around Christmas last year, we were also able to take a guided tour around Dunkin Donuts Park, which was such a great experience (and I think Quentin really liked it for the free donuts)  Isn't it funny how people complained before Dunkin Donuts Park was built, and yet now you never hear anyone complain about their experiences there after they actually go there?  The "downtown traffic", "highway traffic" and "parking" are all a non-issue.

On this night, I knew this was not only a chance to see baseball at Dunkin Donuts Park but it might be my only chance this year to do so (and I don't want to even begin to think about what next year might hold for the minor leagues)   There is just something about watching baseball inside Dunkin Donuts Park that is different from other places.  It's that feeling of both knowing that the world is happening outside around you and yet not being aware of it.  Especially when the lights go on, it just feels like you're in a world all its own.

This double header had a ten dollar cover charge but that money went to help Johnny Taylor Field and we were told during the game that they were able to raise $2000 to help.   Baseball helping baseball helping baseball is really what you love to see.  When we sat a few rows back behind home plate, at one point I asked my dad what he thought these seats might go for at a Yard Goats game and I said I thought at least $50.   They might not actually be that expensive, but they felt like hundred dollar seats.

Concessions were open and this was the first baseball game I attended this season where we were able to actually buy food  (Not to discredit the fast pitch softball of the Brakettes)  Quentin ate a lot of food throughout the night while I had a beer which was specially made for the Yard Goats.   It was certainly one of those times you would think of as being a night at the ballpark and it's a lot of what baseball should be.   People were sitting socially distanced (and I didn't see anyone not wearing a mask when we were supposed to) but I wonder how many people would have been in attendance if they didn't have to distance.   Throughout the night, Dunkin Donuts Park remained fairly full.

Both of these games only went six innings each, which made sense with the time constraints, but they each had six innings of excitement- of intense baseball action.   The Expos and People's put up big run innings, while the Steel and Jets seemed to battle against each other only one or two runs at a time.   Anyone who is a fan of baseball could have enjoyed these games, even if they knew nothing about the teams and league.

I was only taking pictures during the first game because it got dark and then I didn't know how the second game would go.  The funny thing was that I expected my dad would want to leave by 10 because it would be late but even he stayed invested because it was such a good game.   And, yes, these games count towards their season, but I'm not going to look back at these games and remember who won or lost so much as I'm going to remember a night spent out at Dunkin Donuts Park with my dad and son, which really you couldn't ask for more.

Posted by Joshua Macala at 6:57 AM