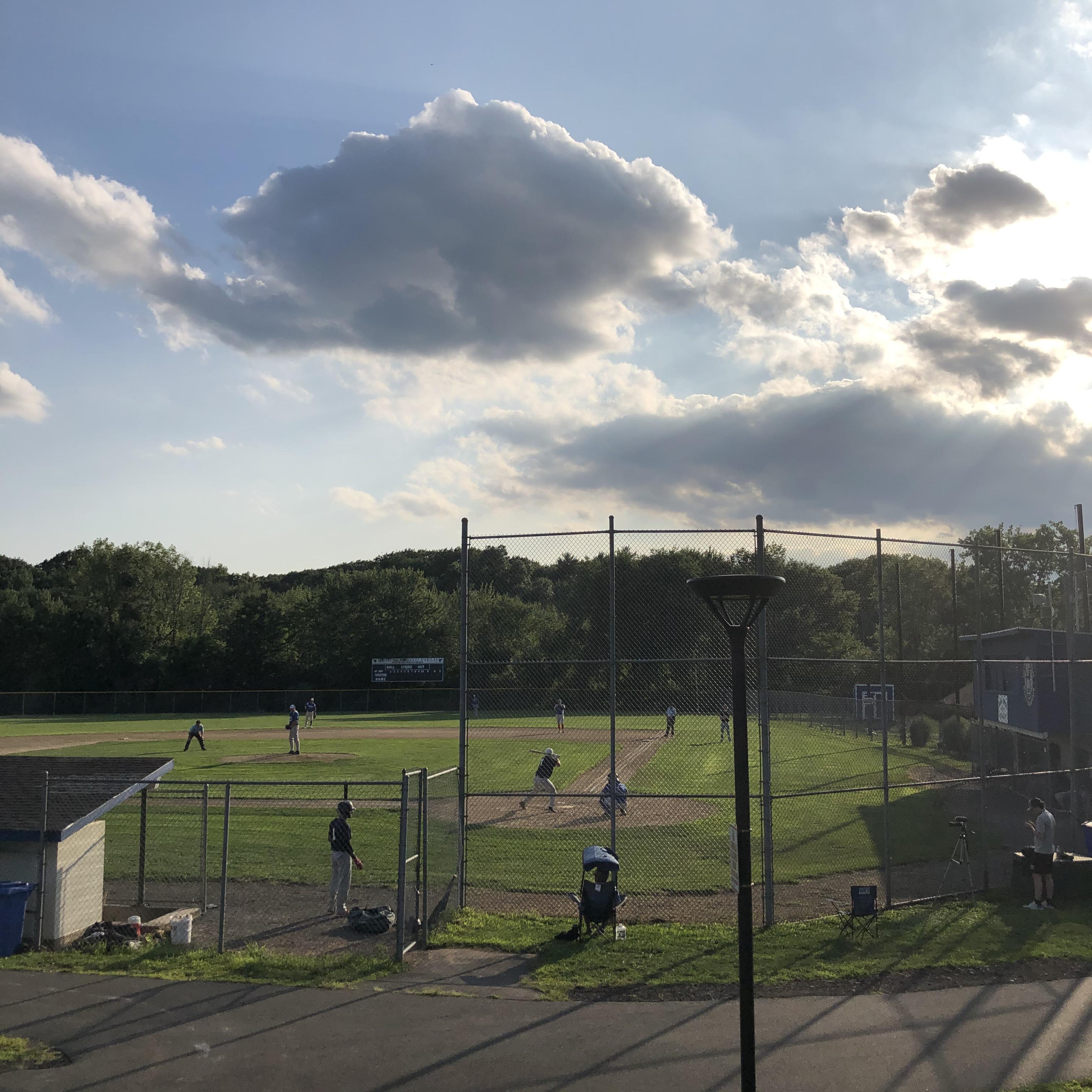 
This game was supposed to be a doubleheader at McKenna Field and we actually went to McKenna Field first because we didn't realize it had been moved until it was too late.   We checked the GHTBL website and saw that it had changed to Wethersfield High School so we were back to where we were the night before and made it there with only missing a little bit of the top of the first inning.   Power is out at McKenna Field and this storm from Tuesday is still being felt across the state.

If People's had won this game and the two left after it in their regular season they could have tied for first place, so it felt like a big deal to me.  As with the night before, it felt like there were more non-People's fans in attendance which makes me wonder what happened to all of the People's fans.  Have they gone home until the playoffs?  It was somewhat hot during the day, but there was a breeze so it made for a nice night for baseball.

There are two players and two key plays which made this game what it was.   Funny how you can sit and watch a game for two hours and it all comes down to a few moments, of which if you miss then you've really missed it all.   Willy Yahn, who was playing for People's, seemed to reach base at almost every at bat and somehow steal from first base all the way to third base.  At one point, he got caught going from second to third and should have been run down between Jets' players but he made it safely to third!

In what was the biggest error of the game People's had runners on first and third with Willy Yahn being on third.   The runner from first went to steal second so of course the Jets catcher threw to second to try to get him out.   This brought Willy Yahn home and scored the first run of the game in the third inning and the funniest part was that the throw wasn't even good and the runner was safe at second.

The Jets came back in the fourth inning though, putting up two big runs and making the game 2-1 until the sixth.   The Jets seemed like they were going to put in a new pitcher every few innings but eventually settled on Leif Bigelow.  When Leif Bigelow got into his groove it was hard to touch him and this game remained with such low scores likely because of the pitching.

During the sixth inning we saw our second and final game deciding play.  The Jets had Taylor Kosakowski at bat and he hit a long shot which turned out to only be a single for him, but it was powerful enough to score two runs.   These runs proved to be vital for this game because there was a bottom of the seventh homerun by People's which would have tied the game and put People's in a better position to walk it off had they not been scored.   With that single at bat, Taylor Kosakowski became the player of the game.

People's didn't get to tie for first place and now with a number of makeup games (three games in one night!) the rest of the standings are going to fill out tonight and then the playoffs will be clear.   The Phillies clinched first place with a win over the Orioles and then the Graphics clinched last place by having too many losses.  Typically, from what I can tell, the Orioles don't win the season but somehow win in the playoffs, so this year it might come down to the Phillies and Orioles, but the Expos and People's both remain threats.  The Jets and Steel have both been defeating these higher ranked teams as well, so going into the playoffs it really is anybody's ball game (except for maybe Rainbow Graphics)

Posted by Joshua Macala at 7:43 AM