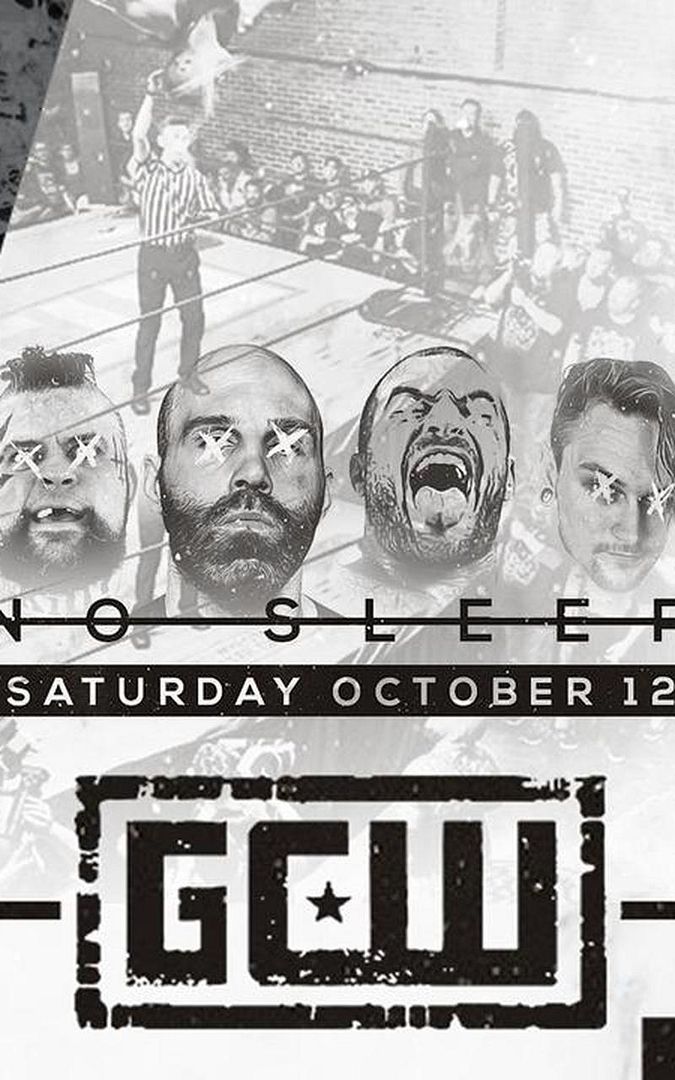 My first time watching GCW was their show with Black Label Pro and that was like Wrestlemania meets Christmas.   Now, GCW is standing on their own and it's time to see the star power shine.   I feel like in the opening match I've seen a lot of these names before but don't remember.  I know I saw John Silver in a kicking war with Kimber Lee at the Beyond Wrestling event "All Hands On Deck" and I know I've seen KTB as well.   But this was just such a fun way to start off this show, with all of these guys flying around the ring and a lot of power in it as well.

In the second match Tony Deppen defeated SHLAK and the funny thing here is I've seen Tony Deppen a number of times- he's one of my favorites- and I just saw SHLAK for the first time in the first Unsanctioned Pro event.   So that feels kind of like a happy coincidence.   The third match had me very impressed with Jake Atlas, who I believe I was seeing for the first time, and he defeated Ophidian, who is seemingly everywhere I want to be.   After the match, Jake Atlas asked for a handshake which Ophidian did and Joey Janela on commentary said (RE: the code of honor) "Ring of Honor in 2019 fucking sucks" and I'm glad I'm not the only one thinking that.

Chris Dickinson and EFFY had a hard fought contest.   I've seen EFFY once before in his war with Nick Gage and for the handful of times I've seen Chris Dickinson lately, I feel like I keep seeing him on the losing end so it felt refreshing to see him pick up a win here while nearly killing EFFY in the process.   Still, Dickinson put EFFY over after the match.   We went to intermission at this point and I thought about two things:

First off, there is this group of people who believe that anyone who is anyone in wrestling is either signed to WWE, AEW, Impact or maybe ROH, I don't know, but here are a bunch of names that aren't signed to those big type of promotions and can still put on a hell of a show together.   This is the crowd I love.   And secondly, I was around during the glory days of ECW I feel like GCW has such a similar style to it because it's not just "Hey, here's a lucha style match", it's about making the styles mesh and blend together.  GCW does that and it might very well be the best promotion going today.

Following intermission we saw Alex Colon (who has appeared in CZW and isn't related to *that* family) took on Rich Swann.   Joey Janela took a shot on commentary towards 205 Live but I actually like 205 Live.   I'm a huge fan of Brian Kendrick, Drew Gulak and so many more on that show-- it's my favorite thing WWE does.   I sometimes watch NXT (but not every week) and I don't watch their other shows, but I always watch 205 Live because I enjoy it that much.  So I guess I'm talking about it to myself at least.

Listen, I feel like Rich Swann had a lot of hype around him before WWE and even when in WWE I just never really saw his appeal.  But, seeing him get choked out with a chair by Alex Colon was pretty cool.   Maybe I just really am bummed on Rich Swann because his song in WWE was about not being able to handle this and then I always think of that scene in "The Lego Movie" where Shaq was like "Are y'all ready for this? ... Oh no! They were ready for this!"   Maybe I'm just too high.

Is the title "No Sleep" because there is just so much wrestling out there now that you should choose to watch it instead of sleeping?  I know I tend to do that now.

Alex Zayne took on Zachary Wentz in a semi-main event and it's funny because I saw one of the other Rascalz in the event I watched before this (Unsanctioned Pro's first show) and now I see another member of the Rascalz taking on the Taco Bell wrestler.   You know, I feel like Alex Zayne is out of his Taco Bell gimmick now- with me- and I just see him as this great high flyer now.   He's that good.

Orange Cassidy- who I love- took on a certified death match king in Matt Tremont in a match which really had me intrigued.   I say this every time I see Orange Cassidy, but he's one of those rare talents where you see him versus anyone and think "That could be something really special".   He just has that unique quality about him and I think that's what makes him such a star and one of my favorites out there right now (if not my overall favorite)  And seeing Orange Cassidy in a match with Matt Tremont was an experience.   I wish there was a "Best Of" type of Blu Ray for Orange Cassidy but at the same time, you should watch all of his matches in their context because so far none of these events have let me down.

In the main event, Nick Gage took on Matthew Justice in what was just a brutal match.   I honestly don't remember seeing Matthew Justice before, so I looked him up on Cage Match and it seems like he's in GCW a lot.   He actually was also in that big nine man match from "2 Cups Stuffed" but there were too many new names for me to remember.  But now I will remember the name Matthew Justice.    There is also this match where he is versus Mance Warner on an AIW show and I have to watch that now.

But how good is Nick Gage?   This guy is everywhere and he's beating everyone.  He clearly has to be one of the biggest stars not signed to a "major promotion", right? (I put that in quotes because people consider ROH to be a big signing but I think so many promotions are better that those fans might not even watch)  This was my first full GCW only show and I'm watching Nick Gage on Beyond Wrestling's Uncharted Territory as well.   So, yes, this just seems like such a perfect match to end just such a great, great show.